Yesterday morning, I ran a road race that really “got” me.

­What does that mean? You ask. Was it a Pamplona-style running with the goldendoodles? Did Foreigner perform the post-race festivities? Did a circa-1998 Shawn Hunter – not to be confused with real-life actor Rider Strong – greet every participant at the finish line with his bad-boy-with-a-heart-of-gold charm and a Double ShackBurger?

Wow, readers. I’m flattered by your remarkably astute characterization of how a road race might “get me.” Flattered, and quite frankly, a little concerned.

No, this road race – the JackRabbit Battle of Brooklyn 10-Mile Relay – “got” me because instead of distributing to participants yet another XL cotton t-shirt, this race’s swag was (wait for it) a pint glass. Finally, something useful! But don’t believe me. Just ask my heightened hydration today at work. 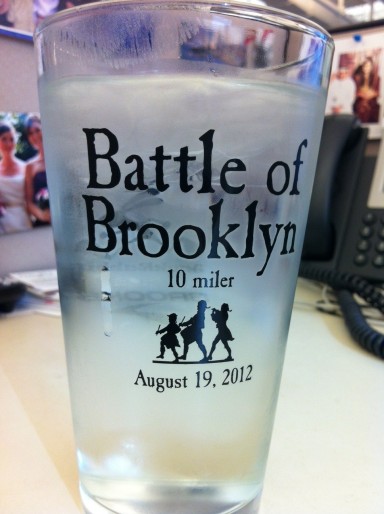 The race itself – which took runners on three loops of Prospect Park  – commemorated the first “major engagement” between the freshly formed United States of America and the British after the signing of the Declaration of Independence, I learned on Sunday. Fighting broke out on Aug. 22, 1776 and transpired from Park Slope to Brooklyn Heights in what was likely the most hipster battle of the Revolutionary War. The Americans lost, ironic eyeglasses and all, but Gen. Washington was able to escape with his remaining troops across the East River to Manhattan before proceeding to do some other less exciting things with the rest of his life that no one remembers. Poor Washington.

My race on Sunday fortunately did not result in 1,000 casualties, but it did afford me my first opportunity to run as part of a relay team. Ten miles can be daunting, but 10 miles divided up between three slightly hungover marathon hopefuls? Perfect. We crossed the finish line in 1:31.57 for an average team pace of 9:12 and then proceeded to refuel with steak and eggs as if we’d completed the entire three-loop course. And by “we,” I mean “me.” Intervention, anyone?

They didn’t break out the individual splits, but my Garmin clocked in at an average 7:59 pace, which I’d say is not too shabby considering I’d already lost a toenail during Friday night’s 15-miler. I never thought I’d say it, but for all of your sakes, thank God sandal season is coming to a close.

How is your fall marathon training progressing? Acceptable units of measurement include miles-per-week and toenails-per-foot.