Posted on September 27, 2012 by rileduprunner

When my alarm went off at an unforgiving hour this morning after a particularly late work event last night, I started doing something with which I imagine every runner is intimately familiar: I started negotiating.

I had eight miles on the schedule, but the litigator in me arrived at court/dawn prepared to plea-bargain it down to just a fraction of that. The facts were on my side: I’d been up past my bedtime, my legs were still twitching from Sunday’s tune-up and I’ve only skipped two scheduled workouts all marathon training cycle long. Who knew? Maybe I’d just walk away with community service.

My counsel knew her stuff, and we ended up settling on a quick jog to Starbucks and back for a total of four miles. But when I arrived at the turnaround point, I still had more in me, so I appealed the earlier decision and ran an extra mile to the Apple Store instead. Once there, I decided to man up and go all the way to Outback Steakhouse before heading home, allowing my daily mileage to clock in at a respectable six.

I know what you’re thinking. Starbucks? Apple Store? Outback?! Did you run to f-ing Times Square?

No, silly. I was running in Cancun. 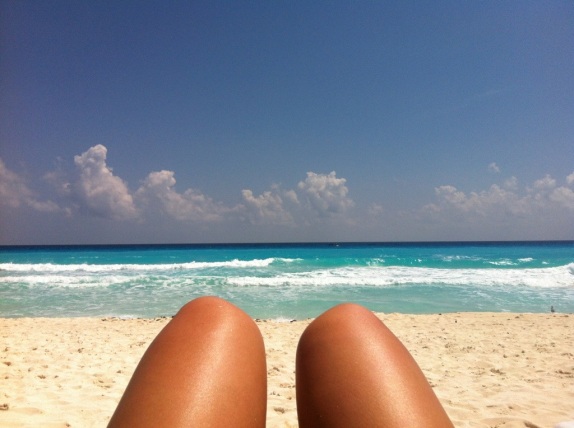 Taken during that glorious 15-minute window between checking out of my hotel room and getting picked up by the airport shuttle. Ah, the joys of work travel.

For those of you who – like me as of Tuesday – have never set foot in the Spring Break capital of the world, let me tell you a few things: the conference hotels are very nice, most of the catcalls are in Spanish and there are more Bubba Gump Shrimp restaurants than I’d care to admit. So basically, yes, I ran in Times Square today. Not as long or as far as I was supposed to, but given the 90-degree temperatures and south-of-the-border humidity, I’m proud of myself for lacing up my Asics at all.

And who knows? Maybe I’ll make up those extra two miles after my scheduled 12-miler this weekend when I’m back in cool, crisp New York City with well-rested legs and a less-crippling fear of being kidnapped mid-run. Or maybe I’ll bring in the big guns and talk my way out of that one, too. NYC delivery bagels have been known to make a fool-proof closing argument.

Do you ever bargain your way out of a run? Or once you get out there, can you convince yourself to push on through?

1 Response to The Third Stage of Marathon Training: Bargaining