I self-identify as a lot of things, but my level of actual participation in some categories would suggest my membership is tenuous as best. Case in point:

But one self-classification in particular has grown increasingly shaky: my claim that I’m a runner.

Now don’t get me wrong: I in no way believe distance or speed or competition are mandatory for calling oneself a runner. From Olympic elites to Central Park joggers to everything in between, all you need to call yourself a runner is a pro-running attitude. 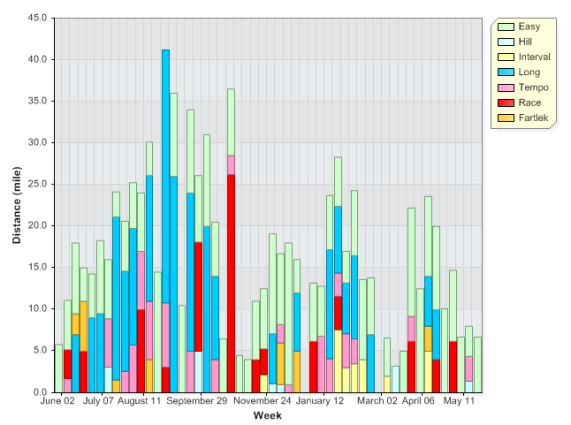 There are plenty of reasons my running may have lost momentum these last few months. My spring half marathon was canceled. I’ve been working my way up the East Coast wedding circuit. I’m in the process of moving from one fifth floor walk-up to another. It’s getting hot.

But I know deep down inside the real reason I’ve been pushing workouts to the backburner is that July means for me the onset of fall marathon training, and I’m just not mentally there yet. The prospect of running up to 40 miles a week — when I’m currently lucky to squeeze in 6 — is more than a little daunting for this out-of-shape athlete. Sure, logically it makes sense to build a base now so the first few weeks of training don’t hit me like a brick, but I’m not always a logical being, and ignoring the looming deadline seems like a much safer prospect indeed. I’m nothing if not an ostrich playing in the sand.

Of course, that was also my mindset last summer, and I paid brutally come marathon morning.

When it comes down to it, I guess it’s time I stop lollygagging and get out there. In truth, life is full of things we don’t want to do but do anyways, from small talking at cocktail parties to putting on pants, and maybe running is just going to have to be one of those things for a while. I assume once I get stronger and faster again, I’ll get out of my rut and pride myself in my runner classification once more, but until then, perhaps I just have to fake it.

Much like Keira’s weak attempt at a fake smile when I told her we’d be having company on board the boat this weekend in Baltimore.

At least our guest did not notice the death stares.

How do you motivate yourself to run when you simply, stubbornly, childishly just don’t wanna?

2 thoughts on “Faking It”