Posted on September 4, 2014 by rileduprunner

I recently mentioned to my boyfriend that I was aiming to lose a few pounds to get down to racing weight before the Philadelphia Marathon on November 23.

“Well, that’s pretty inevitable, isn’t it?” he said. “How can you train for a marathon and not lose weight?

Weight loss during marathon training is about as likely as getting your niece to return your phone calls after forcing her to complete the #icebucketchallenge against her will.

But how’s that possible? Weight loss during marathon training is supposed to be easy. Like taking candy from babies. And interviewing central bank governors.

Spoiler alert: I did one of those things today. Next goal: Taking candy from a central bank governor.

It may seem unlikely that upping your mileage so dramatically in the months leading up to a marathon doesn’t give you free reign to snack with abandon or always have dessert or order the porterhouse for two for one.

Who’s to blame for this sad reality? Math. Blame math.

Let’s break it down. Running upwards of 40 miles a week burns about 4,000 calories every seven days, which averages out to about 571.4 extra calories you can consume a day — but that’s only if you’re trying to maintain your current weight.

Since it takes cutting out 3,500 calories a week to lose a pound, that means you can only eat an additional 500 calories a week during marathon training if you’re trying to slim down before race day. Five hundred calories a week divided by seven days, and that’s 71 extra calories a day – or the equivalent a smallish apple NOT dipped in peanut butter. (Gross.) Or half a Bud Light. Or one solitary lick of this New England lobster roll. 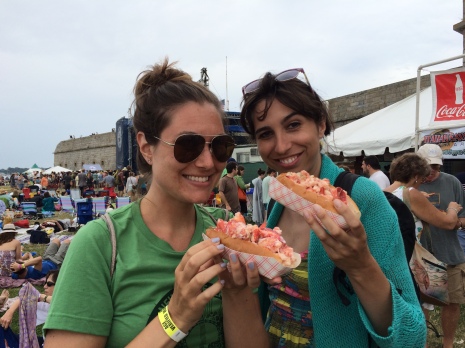 I still can’t believe they asked if we wanted butter.

Trying not to overeat is always hard, but curbing your calorie intake after running seven miles before work? Downright impossible. Which is why, despite my best intentions, I had a chocolate croissant for breakfast today and why, despite valuing my intestinal health, ate at a $9 all-you-can-eat Indian buffet for lunch. Good thing Ben’s out of town.

I know I wanted to shed a few pounds between now and November, but marathon training is hard enough as it is — physically, socially, emotionally — that I just don’t have it in me to also count calories so closely. Sure, I’ll try during the next 11 weeks of training to maintain my regular healthy eating habits (five fruits/veggies a day, cooking at home, only putting ice cream on my cereal on the weekends), but if I go over my daily count, I’m not going to beat myself up.

I’m going to have my 71-calorie apple every day — and I’m going to dip it in peanut butter.

Have you ever lost weight during training?