Most everything that begins with the word ‘ice’ is A-OK in my book. Ice cream? Yes, please. An ice cold beer? Hook me up. 90s hip hop classic ‘Ice Ice Baby?’ Two times the fun.

The newest addition to the list: post-run ice baths. 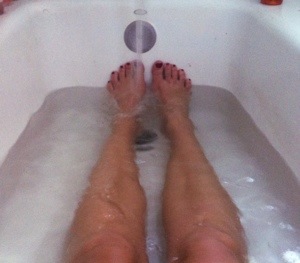 Ice baths get mixed reviews from the distance running community, with advocates hailing their healing power and doubters claiming they do more damage than good.

I’m no scientist, but I’m pretty good at googling, so I’ve learned a thing or two about cryotherapy, or cold treatment. According to its supporters and this Runner’s World article, taking an ice bath after a heavy workout constricts one’s blood vessels and decreases metabolic activity, thereby reducing inflammation and tissue damage, resulting in a faster recovery time. According to its opponents, the science of ice baths is wonky at best and sitting in a bath of ice cubes can cause hypothermia. It didn’t work out well for Jack Dawson, they argue, and it probably won’t work out for you.

I’d been hesitant to buy into the ice bath hype, mostly because 1. sitting in a frigid tub is not my idea of a fun time and 2. I don’t think I really need a No. 2. But after running 19 miles in late September and finding myself unable to traverse stairs for the better part of the following week, I knew I had to at least try something new on the recovery front after this weekend’s 20 miler.

(Yes, I ran 20 miles on Friday instead of going to work. You know, because that’s a totally normal way to spend a vacation day. Have I mentioned lately that I’m a masochist?)

My friend James was in town, so we did a 10-mile loop of Central Park before he left me to shuffle through the second half alone. Fact: Running 10 miles with a friend flies by. Fiction: Running a second 10 miles after your friend leaves is just as fun. If not more.

It wasn’t pretty, but I managed to make it through all 20 miles and back home
to my corner store, where I picked up a bag of ice. I then crawled my way up five flights, filled the tub 10 inches high with cold water, put on a wool sweater, dumped the ice and hunkered down for 10 to 15 minutes of torture.

Turns out, it wasn’t that bad. I brought some reading material, drank a cup of coffee and watched as the ice cubes melted around my aching legs.

More importantly, I awoke from my afternoon nap virtually pain-free and, by Saturday, felt like I was moving on fresh legs again. One ice bath does not a convert make, but since 100% of my ice bath experiences have thus far been positive ones, you can bet your bottom dollar I’ll be taking the plunge again after my upcoming marathon.

I may have to take one today, too, to induce recovery after having been beaten up by my niece, Keira. Roundhouse kick to the face? Well played, pup.

Are you in the pro ice bath camp? Why or why not?

3 thoughts on “You’re as Cold as Ice”