Hey there, injury prone comrades! Shout if you’ve ever had any of the following sidelining ailments: 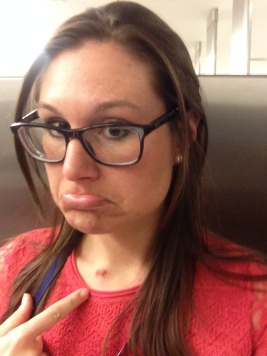 The culprit was a long-sleeved white running top that I treated myself to at Christmastime as part of my traditional “one gift for you, one gift for me…” purchasing pattern. The brand? None other than my pals over at Asics whose praises I just sang. I guess we all have bad days.

I’d worn the shirt once right after buying it for an easy 2-miler and thought the skin near the neckline felt kind of raw afterwards, but I shrugged it off as a one-time inconvenience that would disappear after I’d put it through the wash. I didn’t pull it out again until late March, when I needed something lightweight for an early morning 10K. I threw it on, pinned on my bib and shot out of the starting gate. It’s sunny, it’s crisp, it’s not that crowded, I thought to myself as I rounded mile 2. Nothing can stop me now.

And then the pain began. It’s amazing that something so minor — the slight, rubbing pull of a synthetic fiber against the collarbone for 51 minutes — could cause so much pain, but, my God, I would have sold out my own sister by the time I crossed that finish line to make it stop. I don’t think I’d hold up well in a hostage situation.

As anyone who has ever had a clothing-induced running injury knows, you only really know how bad it is once you get in the shower. The neighbors who heard me yelp can attest to the fact that it was bad. Over the next several days, the red chafing turned into a bloody scab, then a dark red splotch, and then a light red splotch, where it’s sat unchanged now for several days.

And all this time, it’s just looked like I’ve had a giant love bite on the side of my neck. I’m so glad I had meetings with the new editor in chief several times these last few weeks. First impression? I’m a lothario.

I was understandably ready to toss the offending shirt to the curb, but then some book club friends gave me the idea: why not cut out the neckline using a pair of fabric scissors?

So I watched a video online about how to cut a neckline off a shirt (spoiler alert: If you know how to use scissors, you don’t need to watch this rather obvious video) and then went about hacking.

In the battle of Anne Vs. Shirt, Anne was won!

Have any of your running clothes ever left their mark on you?

3 thoughts on “Leaving Your Mark”