With the starting gun of the Marine Corps Marathon just a few short hours away, I could use this space today to talk about this morning’s two-mile shake-out run (refreshingly brisk), my post-run stretching routine (deplorably inadequate) or my candy corn-filled carb-loading breakfast (scientifically nutritious.)

But for once (ok, for twice), I’d like to take a moment to hail the accomplishments of – brace yourselves – someone other than myself on this blog: in this case, my family and friends serving in the military.

I signed on to run the Marine Corps Marathon, as opposed to some other 26.2-mile event, mostly because it was conveniently located within an hour’s drive of my parents’ house and I could skip the lottery by guaranteeing entry through a St. Patrick’s Day 10K. But something else invariably also attracted me to this specific event – that running it would allow me an avenue to recognize the network of Marines, Naval officers and members of the Army, Air Force and Coast Guard that make up much of my immediate and extended family and many of my closest friends.

When you spend four months training for a marathon, it’s easy to fall into a bit of a narcissistic mindset. MY nutrition strategies, MY race plan, MY (and 30,000 other runners’) special day. After dinner last night (consisting of MY favorite meal of salmon and Brussels sprouts and couscous), I jokingly said I couldn’t help with dishes because I had to rest my legs ahead of the big day. And then I really didn’t help. Ha! Hilarious!

Oh right, and selfish. But you know who wasn’t/isn’t selfish? My two grandfathers, both my parents, my little brother and dozens more cousins, uncles and friends who served or continue to serve our country in the pursuit of safer, increasingly tolerant and – here’s hoping – more peaceful times ahead.

If I were to call them all out by name, this page would become longer than the ‘Annotated List of my Favorite Gramercy Park Dogs’ post I assume I’ll write some day in the very near future. So here is a short selection of some of the uniformed men and women who I’ll be channeling as I make my way tomorrow from the startling line near Arlington National Cemetery to the finish line at the Marine Corps War Memorial to the nearest cheeseburger:

My cousin, Sam, who returned from Afghanistan safe and sound this month to be greeted by his very patient and pregnant wife. 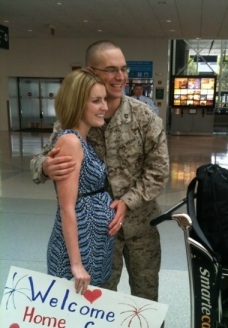 My brother, Tom, who was commissioned into the Marines by my Navy captain mother. No big deal.

My great uncle Austin, who earned two Purple Hearts and the Bronze Star with the US Army. He passed away on Oct. 6 and asked that in lieu of flowers, contributions be given to the Yankee Golden Retriever Rescue League. Clearly, this great man was a blood relative of mine if ever there was one.

Who are you running for?