Though I’ve never spent more than a handful of weekends there over the course of my life, the city of Boston has always had a soft spot in my heart.

In college, Boston was the airport that helped me return to my beautiful campus in the great state of Maine. 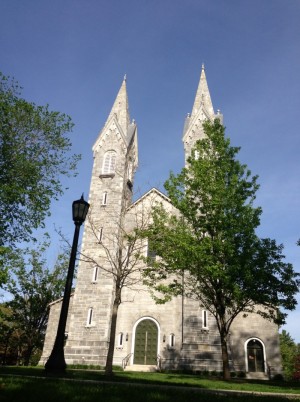 On my 23rd birthday, Boston was the town that saw me ring in another year with two of my all-time favorite friends.

Fifteen months ago, Boston was the city where on a trip with my sister I resolved to throw caution to the wind and pursue my co-worker, consequences and all, when I returned to New York because I had a sneaking suspicion that this thing was going to be more than just a passing crush. I was right.

Boston has brought us all sorts of cultural treasures, from Mark Wahlberg to cream pie, and while I may tease it for its wicked accents and Masshole drivers and adorable belief it wears “big city” pants, this is one metropolis that’s always been alright in my book.

Unfortunately, as we now know all too well, the Tsarnaev brothers did not feel the same.

If you’ve turned on any broadcast in the past 24 hours, you know today marks the one-year anniversary of the Boston Marathon bombings. I myself wasn’t running in the event or cheering on the sidelines or volunteering along the race course, but I’ll recall the deeply personal horror I felt when I heard the news of the explosions for the rest of my life. I had just landed in South Carolina for a work trip and turned on my phone to a deluge of missed calls, and as panicked messages streamed in asking whether I had been running that day, I started to piece together what had happened. I called my mother, then my runner best friend, in tears from the Charleston baggage claim.

The truth is, I was 1,000 miles away from Boston and severely less impacted by the event than so many hundreds of spectators and athletes competing and cheering that day. But as a marathon runner, I nonetheless felt personally targeted and victimized and furious and scared from the events of that day, and I was left wondering whether our sport – and its most elite competitive event – would be forever changed.

In some ways, it has been. Gone are the days of rolling up at the starting line of a New York Road Runner’s race minutes before the starting gun and tossing my backpack into bag check. No longer are camelbacks allowed for hydration on marathon Sunday in New York City. Never again will racing bib-free be a shrugable offense.

Running as a sport has changed, and when 36,000 participants gather at the Boston starting line next Monday, they’re in many ways going to be running an entirely new race.

A lot has changed in the past 365 days, but the resilience of the running community – and the Boston running community in particular – has remained reassuringly constant. If post-JLo Ben Affleck has taught us anything, it’s that Boston rebuilds stronger, and when it comes to Boston marathoners, I think it’s safe to say that’s doubly true.

How are you remembering Boston today?