I spent the first several years of my adult life largely avoiding the vegetable aisle, and not just because I had an innate fear of Jim Henson’s singing produce.

Source: http://blogs.disney.com/ and my nightmares

Raised in a typical American household of the late 80s and early 90s, my earliest memories of vegetables were microwaved broccoli florets, steamed lima beans and frozen peas – nutritional powerhouses, no doubt, but not the kind of introduction to plant-based sustenance that kindles a passion. Sure, I relished helping my mom grow a backyard garden each summer and loved a buttery ear of corn as much as the next kid, but it’s no surprise that one of my earliest memories involved sneaking away from the kitchen table to spit out a mouthful of dilled-carrots that my four-year-old self simply wasn’t having.

Throughout childhood, I mostly filled my five-a-day fruit and vegetable quota with fruits, and that general apathy toward the green stuff continued into college. Every evening at the dining hall, I’d build a side salad to accompany my carby-cheesy entre, but I’d rarely do more than pick the croutons (read: goldfish) off the top before retiring to the sundae bar. The trend continued during my early years as a New Yorker, where stir-fried eggplant from my favorite the Chinese take-out spot was the only crop to make it past my lips. Well, that and the garnishes to my bloody marys. What? It was an indulgent time.

I spent about 23 years of my life actively evading vegetables. And then, one day, that all changed, and I know exactly the dish that changed it for me: a plate of roasted Brussels sprouts prepared by my favorite cousin for a meeting of our book club at my first New York apartment. The preparation was simple — the sprouts were quartered, tossed with olive oil and sea salt, and baked until crisp in a high-temperature oven – but the outcome was sheer decadence. That momentous Monday I realized vegetables could be delicious, and thankfully, I’ve never looked back.

In the years since, my appreciation of vegetables and the sheer diversity of flavors they offer has grown and grown. As a first step, I started shopping the outside aisles at the grocery store. Two summers later, I enrolled in a CSA to get delivered farm-fresh vegetables twice a month. Today, Ben and I grow herbs and tomatoes in our very own outdoor mini-garden. And of course, I still order 38-ounce bloody marys. You know, for the antioxidants.

My brother knows what’s up.

But of all the ways I’ve found to bring fresh vegetables into my life, my favorite is still the original: the farmers’ market.

If you live in New York City, the odds are good you have a Greenmarket within 10 blocks of your apartment at least one day a week. The odds are also good that you should be buying pretty much all of your produce here, rather than at the grocery store.

Why, you ask? First and foremost, farmers’ markets only sell seasonal food that was likely harvested within the last 24 hours, meaning whatever you take home will be higher in nutrients and in flavor than grocery store items that have been in transit for days. Likewise, less travel time means a lower carbon footprint, plus if you have questions about how something was cultivated, you can ask the farmer right on the spot. In my experience, farmers’ market vegetables are less expensive, and since the carrots and beets often come with the tops still on, you basically get two vegetables for the price of one. Most importantly, farmers’ markets make for amazing Instagram photos. 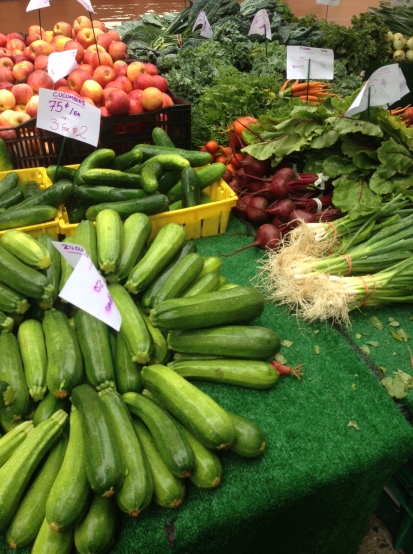 Today,  I arrived at my neighborhood market with $18 in Sacagaweas (thanks, gatorade vending machine, for making the second half of my nine-mile run today much heavier by only dispensing solid metal change) and left with two giant bunches of beets, tri-colored carrots, a giant zucchini, four ears of corn and a loaf of whole wheat sourdough bread, because, come on, I’m human.

That list of vegetables didn’t get your mouth a’watering, you say? What if I show you what I made with them?

The beets I sliced thin on a mandolin, tossed with oil and sea salt, and roasted in a 375 degree oven for 20 minutes to make beet chips.

The zucchini I grated and mixed with a half cup whole wheat flour, half a red onion, an egg, 2 tsp baking powder, a half cup shredded Parmesan, red pepper flakes and salt/pepper, then pan fried and ate with greek yogurt and a squirt of lemon. It was adapted from this Food & Wine recipe, except the brilliant addition of cheese was all my idea.

The carrots I roasted with olive oil and sea salt until browned, then tossed with pesto made out of the carrot tops themselves. Doesn’t look like much, but this is probably the tastiest thing I’ve ever created.

It’s not yet dinner time, and I’ve already consumed two pounds of zucchini, four beets, and a cup of carrots — quantities of vegetables that would have seemed comical to my earlier self. Come to think of it, I’ve even so many vegetables today, I forgot to have any fruit. Ah well. There’s always dessert.

What creative and delicious ways have you worked more vegetables into your diet?

This entry was posted in Food and tagged cooking, eating, food, running, vegetables. Bookmark the permalink.